There is actually nothing all that new about medical marijuana. Humans have been smoking cannabis, or marijuana, to get high for at least 2500 years. The sought-after ingredient in cannabis for this purpose is tetrahydrocannabinol, better known as THC. Physicians have been able to prescribe THC for many years in the form of FDA-approved medications with the brand names Marinol and Cesamet. They are both indicated for the treatment of nausea in patients receiving chemotherapy and Marinol is also given to patients with AIDS suffering from loss of appetite. 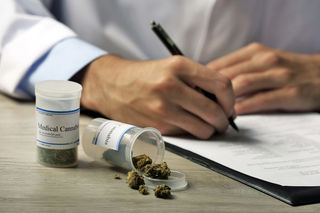 There is another ingredient in the cannabis plant that has a much more recent history—cannabidiol or CBD. When THC is exposed to air or light it actually breaks down into CBD, but ingesting CBD does not induce a euphoric “high.” Yet it is touted as the solution to almost every ailment and illness imaginable, including pain, inflammation, depression, anxiety, and schizophrenia. CBD can be bought in stores and supermarkets and online all over the United States and Europe and comes in a variety of forms, including pills, oils, lotions, and gummy bears.

CBD has been approved by the FDA for the treatment of two rare forms of childhood epilepsy, the Lennox-Gastaut syndrome and Dravet syndrome, and is prescribed under the brand name Epidolex. Studies that led to this approval in 2018 involved relatively high doses of CBD (1000 mg) and involved children who were taking other anticonvulsant medications when randomized to receive CBD to treat their seizures.

What’s the Basis for Taking CBD?

So what is the basis for all the excitement about CBD? Essentially, there is almost no basis. Very few studies have actually been performed to sort out whether CBD works for any other condition besides the two rare forms of epilepsy. We don’t actually know what dose might work for anxiety, depression, pain, or inflammation and we know very little about adverse side effects. Even the legality of CBD is hazy. Federal regulations are clear that a substance that has been approved by the FDA as a drug cannot simultaneously be sold as a food supplement without FDA approval, so technically CBD supplements are illegal in all 50 states. Yet the FDA has a limited budget for enforcement and, so far, has only moved against companies making outlandish health claims for CBD, like claiming it can cure cancer.

Outside of the two childhood epilepsy conditions, there are almost no high-quality, placebo-controlled trials in humans of CBD for any condition. The most extensive study for a psychiatric condition so far was done in 89 patients with schizophrenia who were randomized to receive a high dose of CBD (1000 mg) or placebo, in addition to their ongoing antipsychotic medications. The group that received CBD had significantly greater improvements in many symptoms of schizophrenia. Because CBD does not seem to interact with the neurotransmitter that most antipsychotic drugs affect—dopamine—this study raises the possibility that CBD may offer a new mechanism for treating schizophrenia. But this is only one study and until it is replicated, it is premature to claim CBD as an effective drug for schizophrenia. Furthermore, it is not yet known if lower doses of CBD might work just as well as the dose the patients in this study received.

Another interesting study involved 57 healthy men who were randomized to receive one of three doses of CBD (150 mg, 300 mg, or 600 mg) or placebo before taking a public speaking test. The subjects who received the 300 mg dose of CBD reported less anxiety during the public speaking test than those who received a placebo. Neither the 150 mg dose nor, curiously, the 600 mg dose worked better than placebo. Of course, a small study like this is hardly proof that people with conditions like social anxiety disorder will benefit from taking CBD. Once again, we do not know much about the effective dose.

Aside from these double-blind, placebo-controlled studies, most of the evidence for CBD benefits comes from animal studies and anecdotes. As is well understood, a study using a rodent model of anxiety, depression, or pain may or may not translate into something useful for people. And reports that CBD works for people in pain or with high levels of anxiety run the risk of being placebo responses, a phenomenon that is extremely common when controlled trials of these and similar conditions are finally conducted.

We also lack robust safety evidence for CBD. A recent review suggested that it does have adverse side effects, including diarrhea, fatigue, vomiting and somnolence and may cause liver abnormalities. There may be interactions of concern with other medications. Animal studies suggest even worse adverse effect possibilities, like a reduction in sperm production and neurotoxicity. But just as most of the anecdotal reports of benefit must be taken with a grain of salt, these adverse side effects are gleaned from either the extensive studies of children with epilepsy, very limited human studies of other conditions, or animal studies. Hence, they too are hardly based on very solid evidence.

So Why Do People Take It?

Why, then, given the almost complete lack of evidence that CBD works or is safe are so many people taking it? We will advance three possible explanations:

No one can responsibly recommend that a person use CBD to treat any serious health condition other than Dravet syndrome and Lennox-Gastaut syndrome. Of course, that is not going to stop millions of people from ordering or buying drops, gummy bears, oils, or lotions with CBD in them that offer the possibility of relief for a variety of emotional and physical problems. There is no question that more high-quality research results are on the way, and these will tell us much more about whether CBD works better than placebo, for what conditions, at what dose, and with what safety profile. In the meantime, we can only marvel at our propensity to leap onto a healthcare fad that has almost no underpinning in valid science.